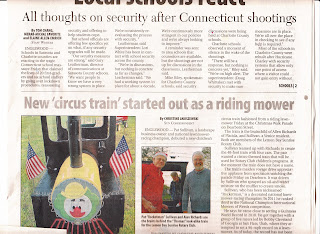 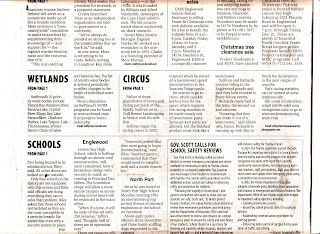 The lawnmower racing story that I wrote made it's way onto the front page of the Englewood Sun. I got to ride on it too & it was a lot of fun! The link to the article is: Circus Train Started Out As A Riding Mower. The online version has a few other photos that I took.

ENGLEWOOD — Pat Sullivan, a landscape business owner and national lawnmower- racing champion, debuted a new children’s circus train fashioned from a riding lawnmower Friday at the Christmas Walk Parade on Dearborn Street.
The train is the brainchild of Allen Richards of Placida, and Sullivan, a Venice resident. Both are members of the Lemon Bay Sunrise Rotary Club.
Sullivan teamed up with Richards to createhe 40-foot train with four cars. The pairwanted a circus-themed train that will beused for Rotary Club children’s programs. At the moment the train does not have a name.

The train’s maiden voyage drew appreciative applause from spectators watching the parade Friday on Dearborn. It was driven by Sullivan who sprayed an oil-and-water mixture on the muffler to create smoke.
Sullivan, who has been nicknamed
“Rocketman,” is a decorated national lawnmower-
racing champion. In 2011 he ranked
third in the National Champion International
Mowers of Weeds competition.
He says he came close to setting a Guinness
World Record in 2010. He got together with a
group of five racers led by Bobby Cleveland
of Georgia at Salt Flats, Utah, where they attempted
to set a 96-mph record on a lawnmower.
As of today, the record has not been
officially recognized by the Guinness World
Record committee, Sullivan said.
Father of three,
grandfather of seven and
racing patriarch of the
family, Sullivan owns
Gulf Breeze Landscaping
in Venice with his wife
Ren.
Sullivan began his
racing career in 2002,
inspired when he attended
a lawnmower speed
demonstration at the
Sarasota Fairgrounds.
He started to go to
races, which quickly
led to a love for the
sport, which requires
the racing machine to
be made mostly out
of lawnmower parts.
Some go-kart parts are
allowed, but the finished
product must look like a
lawnmower.
Sullivan and Richards
enjoyed riding in the
Englewood parade and
said they look forward to
many future events.
Richards made half of
the train, the second car
and caboose.
“Amazing that they
can make it out of a
lawnmower,” said Allen’s
wife, Karen. Richards is
teaming up with Ren to
finish the decorations
in the next couple of
months.
Pat’s racing statistics
can be viewed at www.
letsmow.com.
For more information,
email info@rocketman
racingteam.com or go to
www.rocketmanracing
team.com.