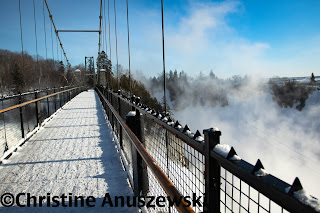 As, I see the old city walls here in Quebec, I keep on having Bono’s lyrics from the Joshua Tree, playing loud in my head:

“I want to run, I want to hide
I want to tear down the walls that hold me inside
I wanna reach out and touch the flame
Where the streets have no name”
~U2

Really, those lyrics keep on reminding me to tear down the block that I placed over my heart at a very young age to protect myself with my gifts and dyslexic struggles. But really, over the years, I have come to realize that dyslexic is a gift and one of the most famous ones in the world are creative and entrepreneurs, just look at Richard Branson. That’s been my journey lately, deeper into the heart, I go.  The other lyric that keeps on playing loud in my head is “What’s love got to do with it?” by no other than Tina Turner. Love is the secret ingredient. Yes, love is the vibration that we need to change ourselves and the world. 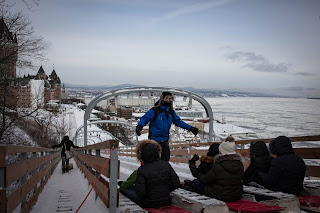 My time in Quebec has been fabulous and I had to extend my stay a few xtra nights too due to this blizzard that swept threw the North East. Oh, well. I extended my stay in South Africa due to that as well. Besides, I didn’t want to leave and looking at wildlife out on the Savanna is pretty amazing.

I’ve walked all over, who would think that I wouldn’t, must be out of their minds. This place is hilly for sure. There’s an upper and lower section to the old city that is quite charming and European flair in the air. I feel like I’m back in Paris, French is spoken beautifully. However, when I say “bonjour” the people immediate know that I don’t speak French, but English. There must be something with the way I say it. I had to laugh, I was walking up a hill on Saturday and two people in a car came flying down it honking their horns and waving to me. It made me smile to see how friendly people are. 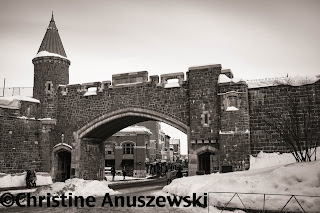 There’s been no rhyme or reason to my adventure. The only thing that I really wanted to do was to set out early on Saturday morning from Hotel le Saint Paul was to be in nature looking at a waterfall. Oh yes, mind you that it was like -10F out and I mean, bloody cold out. The arctic regions are much warmer. Montmorency Falls  was beautiful. I loved that I didn’t get charged to park the car. I really didn’t see too much of the falls due to the heavy white mist and ice covering the falls. A beautiful morning soaking it all in. Mind you that driving in Canada is a wee bit different then the states, the street lights are different and since I’m hanging out in the Providence of Quebec the main language is French and the stop signs are in French. I have found that Siri hasn’t been too reliable, might be from my international roaming and there’s a lot of one way streets with hills in to them in Old Quebec. It’s been rather an adventure, you might say. 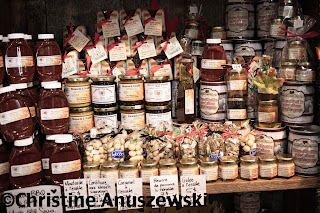 The  toboggan ride  in front of the Chateau Frontenac is epic. I can now say that I have seen the real one, not the mock version that is at EPCOT at Walt Disney World. By the way, the lobby is beautiful to look at and the architectural is beautiful! I had to let out a good scream, and what better way to do is to go down the toboggan and let one out. So much fun! However, note to self, the Go Pro doesn’t handle cold too well and I couldn’t video it cos my battery went dead. 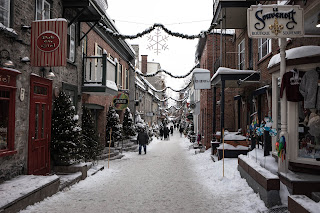 Grateful not to have drove home as originally planed on Sunday, it was a windy and snowy day for sure. The nightly St Laurence was blowing a gale,  I haven’t seen wind like this since Antarctica! I just enjoyed myself at the
Musuem of Civilization where I learnt a lot about Quebec and the First Nations and London too with a special exhibit.

I have found some good eats too!  Chic Shack for an amazing homemade veggie burger,  Sapristi Cafe  for yummy two type of salmon gluten free pasta, and not to mention the brilliant  Market Old Quebec for yummy salads and a nice wander to look at the good. Not forget my morning spot for some crepes at  Le Veravin, the restaurant at the hotel and yes they do offer a lot of gluten free items. So much goodness to be found. Just wander without a plan and see where it takes you. That’s what I’ve been doing over the weekend!


Labels: Adventures Be Here Now Be Present Be The Change Be The Light Be You Canada Inspired by Travels Love Quebec