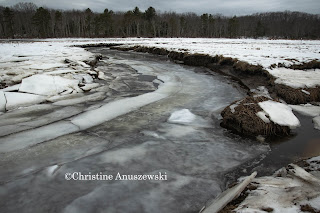 I felt like looking at some ice the other morning. But as I was, I was also reflection on where I was a year ago or other past winters. There comes a time to challenge old beliefs and rewrite the stories of our lives. This little passage, spoke to the core of me with my transformation.

“The root of the word courage is cor-the Latin word for heart. In one of its earlier forms, the word courage had a very different donation than it does today. Courage originally meant “to speak one’s mind by telling all one’s heart.” Over time, this donation has changed, and today, courage is more synonymous with being heroic. Heroics is important and we certainly need heroes, but I think we’ve lost touch with the idea that speaking honestly and openly about who we are, about what we’re feeling, and about our experiences (good and bad) is the definition of courage. Heroics is often about putting our life on the line. Ordinary courage is about putting our vulnerability on the line. In today’s world that’s pretty extraordinary.”
~Brene Brown

Labels: Be Here Now Be Present Be The Change Be The Light Be You Courage Reclaiming Power Back Reflection