I had a very busy day out & about in Toronto.  Yes, I took off to Canada for a weekend to a visit a friend of mine & his family that I haven't seen since I left Japan.  My Nihongo skills are slowly coming back too.  I spent the morning at the University of Toronto helping my friend out with an ESL lesson.  The cool thing was that I got to use my website as part of a teaching prop to show the students on where I've been & talked about bubblenet feeding the only group behavior that humpbacks do in Alaska.  I had fun with the students asking me questions & helping them with learning English.
My afternoon was busy exploring tho.  I wander down to Kensington Market to find some yummy ethnic food for lunch, Middle Eastern & a Caribbean bakery for empanadas.  According to Chris Nuttall-Smith, former food editor, Toronto Life magazine says "Wander through the market & eat like a king." It's amazing & very affordable even for those on backpacker budgets. Something about the section of the city that I was in reminded me of Seattle in a way. It has a very bohemian vibe to the place, which I love.  I stumbled across numerous produce shops, health food stores & Tibetan stores.  I even found a store blowing bubbles as in the kind that you blow as a kid.  It was lovely.  I went to the Ontario Art Gallery for a fabulous Pablo Picasso exhibit.  His work is amazing & was happy to see one of my favorite artists work in such an eclectic representation of his work & the different styles he used threw out his lifetime. I did make it down to see the famous Canada Tower too & was looking for a new angle to photographic it. Funny how I had a guy on a bike tell me to shoot the tower threw the puddle after I left the Steam Whistle Brewing.  It took me several tries to see what he was saying & I finally did see it. It was an interesting perspective for sure. It even was nice for the guy on the bike to ask me if I got the shoot too & I said yes.  Overall I have had a busy day of exploration & a lot of fun too.  Wandering the city by foot is sometimes the best way to get the full effect & to take in the little things that might be overlook if you took the metro. 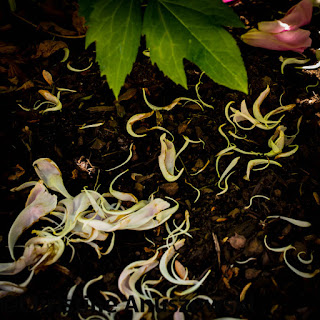