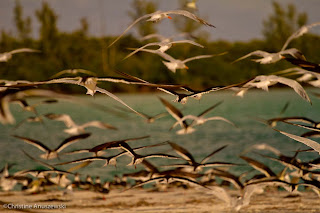 Today my wildlife viewing was not something that I would be too excited to photography since I have a phobia of birds.  I have to admit while taking a walk on Little Gasparilla Island, the island that is adjacent to Boca Grande, I found the Least Tern's to be beautiful to photograph.  They were not your typical seagulls that I have seen growing up on the Maine Coast, but they were rather a less timid than the gulls in Maine who tend to attack your food when you least expect it at the beach.  I wasn't too scare with the birds today even tho they were flying by me.  I guess I built up a wee bit of tolerance from my experience on Isa Rasa in the Sea of Cortez.  Anywho they were pretty to watch.