Mullet Fishing Gearing Up for Season 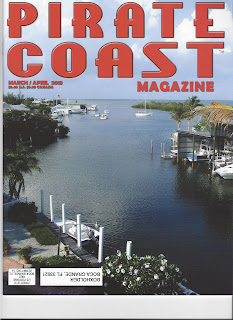 I wrote this mullet story back in mid December 2012.  It finally got published in the Pirate Coast Magazine March/April 2013 Edition on Boca Grande, Florida.  A wee bit of local history that I wanted to shed a positive light on a dying art in Florida. 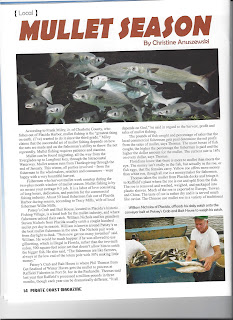 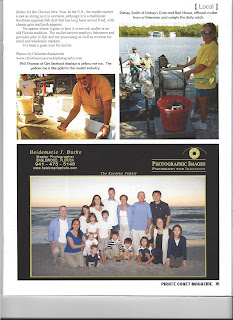 According to Frank Miley, Jr. of Charlotte County who fishes out of Placida Harbor mullet fishing is, “Greatest thing on earth,  (I’ve) wanted to do it since the third grade.”  Miley claims that the successful art of mullet fishing depends on how the nets are made and on the fisherman’s ability to throw the net repeatedly.  Mullet fishing requires patience and stamina.

Mullet can be found migrating, all the way from the Everglades up to Longboat Key through the Intercoastal Waterways.  Mullet season runs from Thanksgiving through the end of January.  This winter, all parties involved-from the fisherman to the wholesalers, retailers and consumers-were happy with a very bountiful harvest.

Fisherman who harvest mullet work non-stop during the two plus month window of mullet season.  Mullet fishing is by no means your average 9-5 job. It is a labor of love consisting of long hours, dedication and passion for the commercial fishing industry.  About 50 local fisherman fish out of Placida Harbor during season, according to Tracy Mills, wife of local fisherman Willy Mills.

Patsey’s Crab and Bait House, located in Placida’s historic Fishing Village, is a local hub for the mullet industry.  Mullet fishermen unload their catch at Patsey’s.  William Nichols and his grandson Steven Nichols from Placida usually catch a couple hundred mullet per day in season. William is known around Patsey’s as the best mullet fisherman in the area. The Nichols pair work from daylight to dust during the season.  “Nets now get too many juveniles” said William, he would be much happier if he was allowed to use gillnetting, which is illegal in Florida, rather than the two-inch nylon, five hundred square feet seine net that doesn’t allow him to catch the bigger fish. He also said “the fisherman are like the farmers always at the low end of the totem pole with 50% making little money”.

Patsey’s Crab and Bait House is where Phil Thomas from Get Seafood of Winter Haven gets the mullet to process at Raffield Fisheries in Port St. Joe in the Panhandle. Thomas said last year that Raffield's processed a million pounds in three months, though each year can be dramatically different.  “It all depends on God,” he said in regard to the harvest, profit and sales of mullet fishing.

The pounds of fish caught and percentage of sales that the local commercial fisherman gets paid determine the net profit from the sales of mullet, says Thomas. The more boxes of fish caught, the higher the percentage the fisherman is paid and the higher the dollar amount for the mullet.  The current rate is 16% on every dollar, says Thomas. The fish itself is less valuable than the roe the females carry.  Yellow roe offers more money than white roe, though all roe is a moneymaker for fisherman.

Thomas takes the mullet from Placida docks and brings it to Raffield’s plant where the roe is cut and split from the fish. The roe is removed and washed, weighed and packaged into plastic sleeves.  Much of the roe is exported to Europe, Taiwan and China.  The taste of roe is rather dry and it is served much like caviar. The Chinese use mullet roe in a variety of traditional dishes for the Chinese New Year.  In the U.S., the mullet market is not as strong as it is overseas although it is a traditional Southern regional fish dish that has been long served fried with cheese grits and hush puppies.

No matter where it goes or how it is served mullet is an old Florida tradition. The mullet harvest employs fisherman, provides jobs in fish and roe processing and revenue for retail and wholesale markets.

It's been a great year for mullet.