Can We Find Love in Politics ... 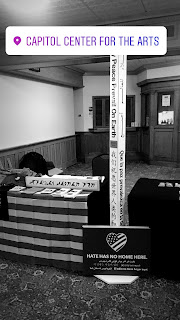 I'm in love, sweet love with  A Politics of Love: A Handbook For A New America Revolution by Marianne Williamson! Beautiful words spoke with a huge heart. I was glued to every page of this. Nothing in the book is new to me. It's stuff that I often question during my studies of politics at university. Where have we gone wrong in this country. As someone who has stepped foot on every continent and blessed to have friends from all corners of Mother Earth, I often had conversations with my friends over the lack of health care and the fact that most in America have to work multiple jobs just to survive. It's sad that love is not our bottoms line, we are caught up with the likes and pleasing others, and corporations telling us how to think, what to buy and how to vote, to name a few of the controls.

Last year, I was trilled to hear that Marianne Williamson was giving a talk in Concord, New Hampshire. Something in my heart was speaking to me to buy the ticket. I had to keep on telling myself, buy the ticket and the money will come. I remember calling up the Capitol Center for the Arts box office to purchase the ticket when they went on sale and got a front row seat pretty much. My heart sung with joy when Marianne came on stage talking like she always does about A Course in Miracles and how we have gone back to preslavery time in America with how everything is being destroyed and we are in a crisis. It's not that hard to figure out since we had a lot of hatred with the last presidential election.

I could on and on with quoting the entire book, but I'll lead that the reader who is itching to learn more by actually opening it up and reading it. There's so much beauty in every page and if you are like me, you can feel the pages filled with love and cries to make America rise up from the fears and hatred and lead with love. Can we create a future for our own children and their children that is better than how we found it? Love is the answer. Look within yourselves to LOVE yourselves first and let that be a ripple effect onto others to do the same and to bring about the change we need not just for America, but Mother Earth as well!

“We need a politics of love. Love is the angel of our better nature, just as fear is the demon of the lower self. And it is love, not fear, that has made us great.” ~Marianne Williamson

"The wealthy inequality in America today has led to what is essentially a new class of aristocrats and a new class of serfs. In the richest nation on earth, roughly 40 percent of our citizens now have a hard time cover their basic costs, from food and health care to transportation and rent. Sixty-two percent of Americans cannot be deemed members of the middle class. Million of Americans have to wrk at two or three low-wage jobs just to make ends meet. And in issues ranging from justice to education to health care to environmental protection, the underlying cancer of unbridled corporate influence on political cam pains is poisoning the very roots of our democracy."

"We need to recognize that climate change poses an existential threat to our survival.

We need to recognize that the physical resources of the planet are not unlimited, and that in abusing them we are endangering ourselves and our children's children.

We need to recognize that the endless application of brute force will not bring peace to the world, and that only the soul force of justice, meaningful human relationships, forgiveness, and compassion can end the scourge of violence on our streets and throughout the world.

We need to recognize that to fail our children is to destroy our future.

"Consider spending five minutes every day sitting with your eyes closed, sending love from your heart to everyone in your country, and extending that love to every sentient being in the world. Such mediative practices opens the mind to new dimensions of problem-solving as a new synapses, new insights, new connections arise automatically. Our biggest failure is to limit our imagination to twentieth-century prejudices, surrendering to the insidious illusion that there's a limit to what's possible. Where there is love, possibilities are endless. But they do not emerge from the world as we know it; they emerge from a place that lies beyond our normal waking consciousness"

Labels: Be Here Now Be Love Be of Service Be Present Be The Change Be The Light Be You Love Politics Reclaiming Power Back Return to Love