Here's a few previous published works of mine: 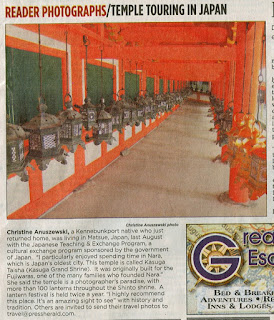 I shot the Kasuga Grand Shrine in Nara, Japan days before I left Japan after having lived there teaching English for two years for the Matsue City Board of Education.  I was a participant on the JET Programme. The photo and text ran in The Maine Sunday Telegram in January 2008. 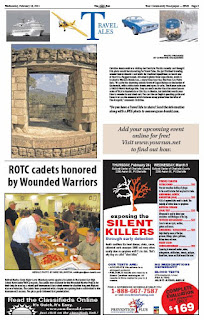 I shot this photo in Copan Ruins, Honduras days before I returned back to the States after my travels in Central America.  The photo ran in the Englewood Sun in February 2011.  I was living in Honduras out on a Caribbean Island, Utila which is part of the Bay Islands.  It is part of the second largest coral reef in the world, right after the Great Barrier Reef.  I guess you can tell that I was scuba diving and I got my Divemasters threw Utila Dive Center (UDC) which is an amazing place! I highly recommend the dive shop.
Labels: Copan Ruins Honduras Japan Nara Published Photos